Well, the doctors finally let me off my leash and let me go spend some time south of the border. No riding for me yet, but it felt great to finally have a chance to play a little bit. I just got back to Arizona a couple of days ago, and brought back some pictures from the ranch. I've posted some of these to the ranch's Facebook page already (here: http://www.facebook.com/rancholachimenea ), and I know Katrina (at least) has already seen them (thanks for the visit, Katrina :tiphat: )

Here are some photos for the non-Facebook types....

My daughter with a buckskin mare we raised

One of our stallions, Sophisticated Duino (AQHA) He's a 2006 model and is now looking the part of a stud...

Another picture of him 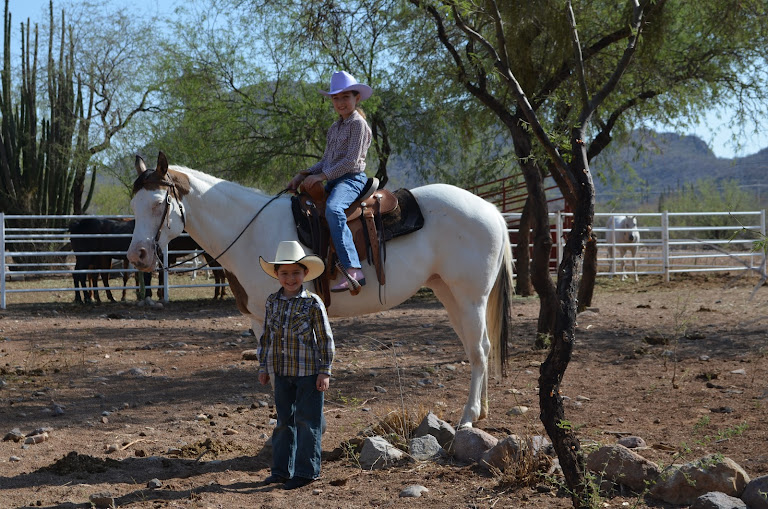 My daughter and the older of our two boys... getting ready to go for a ride...

Here he is with a different hat and on his own fancy ride...

My daughter and one of the fillies...

My daughter with her grandfather and a yearling colt... 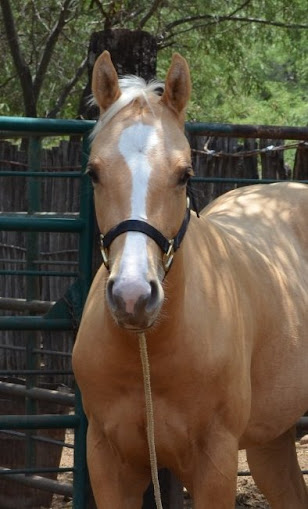 Sneaking a drink from the calves' side... Checking on the calves.... (she's riding one of the mares from Nebraska...not the same buckskin mare as in the other picture...)

Different spot, different horse to ride... this time checking up on some of the mares...
G

Glad to hear your health problems have eased some.

Thanks for the photos, the young'uns are sure growing.
K

I love your mares and that gray stallion is a jim dandy.... He has everything a mare owner would want. If you come to Nebraska again, bring one of those mares for me...
F

Some pretty classy critters there!
I like your stud too, and I like the flea-bitten gray's the best of all
the grey horses. Nice withers on that stalliion....something the horse
world seems to be losing.

Thanks for sharing. Cute kids. And glad you are recovering.
L

You have to quit posting pictures!! I ruined my key board, with drool, and Lisa toasted her laptop!! I all honesty, those are some super nice looking horses!!!
C

Thank you, everybody, for your very kind comments and thoughts. The kids sure are growing; our two year old son (who isn't in the pictures) looks like he might have inherited the defective horse-crazy gene from either his dad or his grandfather. He's as critter-crazy as his big sister. And the older of the two boys (in the pictures) is starting to really enjoy being around the ranch, as well. It's a blessing to be able to enjoy the ranch so much with the children, and even more deeply appreciated given the health issues of the past year.

Katrina, which mare do you want? We have a grand daughter of the mare on the left on the ground this year, by our race bred stud. She's for sale!

Actually, that mare on the left (Pats Silver Charm) is a paternal sister to Corona Cartel, the race horse sire that has been really successful over the past few years; Corona Cartel sired the horse that most recently received the AQHA Supreme Champion recognition. We have a daughter of Pats Silver Charm, Gift of Wheat (also gray, and by a son of Streakin Six... she's the gray in the background of the photo of the gray mares); now that Gift of Wheat's daughter by our speed stallion (Heza Feature Mr Jess, below) is on the ground, we're pretty excited. We're hoping to sell the new filly to a racing home in our neck of the woods to start building a name for her daddy. Pats Silver Charm (the gray mare on the left in the picture) slipped her foal by Heza Feature Mr Jess, so the one filly (granddaughter of Pats Silver Charm) is the only baby we have by our bay stallion and out of one of our mares. One of our breeding clients has a nice filly by the stallion this year, though, and she's also out of a pretty nice mare, so we're hoping she'll also do her daddy proud on the track.

And, the gray mare on the right, Duinos Gray Array, is a paternal sister to our gray stallion in the pictures. We haven't made up our minds yet about whether or not to breed the two of them together. We like what we're seeing in his babies, though, and she's been a heck of a producer for us over the years. She is one of the reasons we bought the gray horse as a replacement stallion. Her two year old colt is the one that won the two year old class at the stock show this spring, and I think all but one of her other babies has been better than the champion two year old is.... She had a heck of a filly (buckskin...) in June of last year that was killed by a cougar before the filly turned three months old, so we bred the mare back late in the year after she lost her baby. We bred her to a pretty nice palomino horse that stood reserve at this year's stock show, and we're expecting that baby of theirs sometime next month.

This picture is about a year old

This picure was taken this winter for a catalog...

Another of the catalog pictures.

Holy Moly.... Anything that would be good with your kids is what I want.... Not really a paint girl... No reason other than I have to stick to one breed. Color or chorme or both..... Am I tooooo picky?? LOL I'm like fasters, those two greys caught my eye. Don't know why they all are really nice... really nice...
Share:
Facebook Twitter Reddit Pinterest Tumblr WhatsApp Email Share Link